Posted by Keith on
in Uncategorized
| comments: (1)

I was on a road trip with a good friend last summer who’s a little older than I am.   He was sharing a story about an argument he had with his wife earlier that week.  The two of them have slept in separate bedrooms for years.  This has been a marriage saver for some couples I know.  It seems as you get older it can be hard to get a good rest sharing a bed with someone, particularly if one partner snores or wakes up a lot during the night.  So some couples do this because of love, not in spite of it.  He was getting ready for work one morning and was franticly looking for a clean dress shirt, but his closet was empty.  He checked the basement, the laundry room, etc. without any luck.  Rather than wake his wife to ask where his shirts were (in their home, she does the laundry), he grabbed a “gently worn” shirt and raced off to the office feeling quite frustrated.  When he got home from work, he told his wife the whole frustrating story and asked her where his shirts were.  “Oh, she said.  They’re in my closet.”

“Maybe that’s why.” I wondered out loud,  “Maybe she just wanted to feel close to you.  Maybe she just missed having your shirts next to hers.”

I was playing at a wedding a few weeks later.  One of the girls I used to pastor is all grown up now and this was the big day when she would wed her life to a charming young man.  I watched as they said their vows and committed their lives to each other and then, the big moment!  The preacher pronounced them husband and wife, and off they went!  With a fanfare, they marched out of the sanctuary beaming with excitement, ready to begin this new life together.  First they’d honeymoon, but soon after they would nestle into a basement suite and begin their new life together.  They would experience a sublime intimacy that can only be found in the mundane.  They’d buy toilet paper and laundry soap.  They’d argue over which brand of soya sauce to buy and whether to keep the ketchup in the cupboard or in the fridge.  They would join their lives together in a million tiny ways.  He’d place his toothbrush next to hers in the toothbrush holder, and in the closet, she would hang her shirts next to his.

As I watched this scene play out in my mind, I felt a sense of sadness.  Ruth and I will celebrate our 12th anniversary this summer and while we are wed deeply to each other in all and every manner, we are a long way down this road.  We moved out of our humble apartment a long time ago. Ruth works in a hair salon.  I’m busy traveling all over the country every second weekend, trying to point people toward Christ through songs and stories, and hoping to bring in enough money to stay half a step ahead of the bank.

Our kids are growing up and are now in school full time.  We are busy with all playdates and all their other various activities.  Our son, was diagnosed with Autism a year and a half ago, and while he is doing well, and progressing marvelously, I’d be lying if I said there weren’t nights when I stay awake wondering what his future will look like.

You never think about these things when you’re 22 years old and sitting across a table, sharing a milkshake, gazing deeply into the eyes of a pretty girl.  In that moment, there are no mortgages or water heaters or autism or sleeping in separate bedrooms.  You just can’t see it from there.  Please don’t misunderstand me, our life together is good, very good!  But sometimes I get to feeling frantic and life feels heavier than it used to.  I start to miss those early days.  I miss our cozy apartment.  It was almost out of a sense of grief that the song emerged.

I wrote most of the song in one day between recording sessions for “Restless” last summer.  I played it for Roy Salmond, my producer, and he seemed to connect to it right away.  We recorded my guitar part on a little 100 year old parlour guitar he had in the studio.  We wanted the recording to be really sparse and have a similar feel to some of Bob Dylan’s early recordings.  Carolyn Arends supplied some background vocals, but Roy played everything else.  (The foot tapping you hear is his too.)  It is, by far, most people’s favourite song on the record. 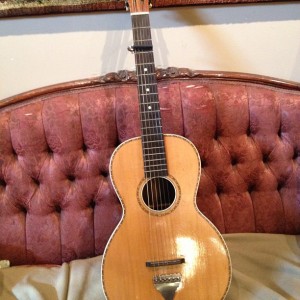 When I started sharing the story and playing “Cozy” at my concerts a few months later, people had a strong emotional reaction to it.  (I generally, don’t like songs that are sentimental, but this song communicates the innocence of young love with a certain nostalgia that doesn’t seem forced or manipulative, so I’m ok with it.) After concerts I had lots of older couples telling me, “Don’t worry.  Hang in there.  Our kids are all grown up now, and you know what?  You’ll get your cozy apartment back.  Just be patient.”

I remember hearing somewhere that good writers create worlds that we want to visit and linger in from time to time.  George Lucas created a whole universe with Star Wars, and Tolkien did the same with “The Hobbit” &  “Lord of the Rings”.  We can’t move our family back into that little apartment.  It wouldn’t work.  But, as a writer, I can create a tiny world.  A cozy little apartment. One that exists forever somewhere.  One that we can visit any time we want to.  One that waits for us, until we’re ready for it again.

Listen to the song Here.