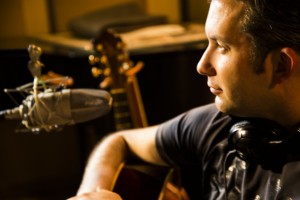 If every successful musician needs a “gimmick” to distinguish themselves, then Keith Kitchen is the exception.  Unless you consider skillful musicianship, disarming personableness, and masterfully crafted songs a gimmick.  There’s no smoke and mirrors here, no fancy light show or  “schtick”. Just sheer talent and creativity.  Keith possesses a rare ability to keep audiences captivated for hours with nothing more than his smooth vocals, compelling stories, witty humour and impressive finger-style guitar playing.  One concert goer recently remarked “My 17 year old budding guitar player was MESMERIZED!!”.

Even more compelling than Keith’s musical ability is his ability to communicate the Christian faith in a way that is both challenging and understandable to both churched and unchurched people.  One pastor commented after a concert, “I feel like we’ve heard 5 sermons through Keith’s music tonight.”  An ordained minister, Keith was once regarded as an exceptional young preacher before he began his present touring ministry.
Keith is an award-winning, independent singer/songwriter and pastor who lives in Swift Current, SK with his wife and two children.  He travels regularly across Canada and has performed hundreds of concerts with the goal of sharpening the Church and deepening faith in Christ through thoughtfully written songs and stories.

Keith has shared the stage with Steve Bell, Michael Card, Carolyn Arends and Jacob Moon. Keith’s work has received several nominations and awards over the years. In 2018, Keith was nominated for “Male Vocalist of the Year” at the GMA Covenant Awards and his album “Orbits” took home the award for “Folk/Roots Album of the Year”.