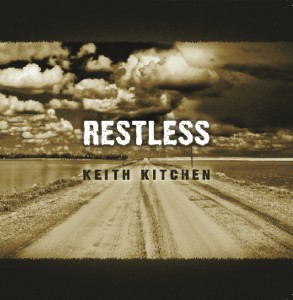 Many of the songs we sing in church today are about asking God to take us out of the world. To shelter us and to be our hiding place. This new album is about asking God to help us engage the world, about trying to live like Jesus did. Embracing a restless world with hope and with grace, however uncomfortable that may make us. The point of the album is not to ease our restlessness, but rather to help us to become properly restless about more significant things (poverty, injustice, human trafficking, etc.).

The album does have a few lighter moments. There’s a fun folk song reminiscing about the first apartment Keith and his wife shared, and a wonderful worship song called “We Come”, that Steve Bell recorded a number of years ago, written by his friend Jim Crogaert.

The title song, “Restless”, is a playful acoustic guitar song which really sums up the whole album. It was inspired by St. Augustine who wrote, “You have made us for yourself, O Lord, and our hearts are restless until they find their rest in You.”.

The album will release November 2nd, 2012. You can order CD’s in the store here on the website.

Order your copy or make a donation to support the creation of this new album.